This post was originally published by Battelle, which manages STEMx, and it’s too good not to share. Have you integrated curling (or any other Olympic sport) into your classroom? Please tell us about it in the comments below.

At Battelle, we take science seriously. And, our researchers may take their hobbies just as seriously as their science. Rick Olson, a mechanical engineer who has led structural analysis projects at Battelle for 41 years, is also an active member of the Columbus Curling Club. He plays the ice sport several days a week and has participated is numerous tournaments, known as bonspiels, over the last decade.

With the Winter Olympics underway in Pyeongchang, South Korea, we asked Rick to share the science behind the sport.

What makes curling ice special?
Curling ice is not hockey ice. It’s very different. Although it’s hard to see, hockey ice isn’t very flat. The curling surface must be remarkably level. If it’s not level, the stone will “fall” sideways as it moves down the ice. A slope as little as 0.005 inches in the 15-foot width of the curling ice can cause the stone to move an extra 30 inches laterally as it travels down the 150-foot sheet.

Making perfectly level ice isn’t easy. When water is added to create new ice, it naturally wants to curve up at the edges to form a meniscus. It also doesn’t freeze uniformly when it’s created due to hotter and colder spots in the cooling coils in the floor. To compensate for the inevitable imperfections, the high spots are removed by scraping and the low spots are filled in with droplets of water broadcast onto the new ice. In addition to the droplets applied to the ice when it is made, it is “pebbled” before each game with small droplets of water to make asperities, creating a texture similar to an orange peel.

Why do the curling stones slide so effortlessly down the ice?
When you watch curling, it looks like the stone will go forever, even though it is not moving very fast. On good curling ice, it takes 25 to 28 seconds from the time the curler releases it until it comes to rest at the other end.

This is because the stones are not flat on the bottom. They are concave with a running band about five inches in diameter and a quarter of an inch wide. Combined with the bumpy texture of the ice, very little of the 44-pound stone is in contact with the ice surface. This creates high pressure that keeps the surface under the stone right on the edge between solid ice and liquid water, which reduces friction. Think about ice skating.

The stones are made primarily from granite quarried in Scotland. The material repels water, has high fracture toughness, and behaves almost perfectly elastically in collisions, meaning stones continue gliding after they hit each other. Each curling stone costs around $1,000 (or as much as $2,000 for the special high-level competition ones) and can have a useful life of a century.

What makes a curling stone curl?
There’s been debate for many years between scientists trying to describe the physics of the underlying mechanism that makes the arching path of a curling stone. It’s incredibly difficult to describe the forces acting on the stone because more spin doesn’t translate to more curl. Typically, three to five revolutions of the stone on good ice causes it to move 3 to 4 feet side-to-side as it goes down the length of the sheet. If you spin a stone hard, it won’t curl at all.

Why are those guys sweeping in front of the stones?
When you sweep in front of the stone, you are polishing the surface of the ice, reducing the height of bumps and scratches. While sweeping doesn’t actually cause the surface to melt, it does raise the temperature closer to the boundary between ice and water, which lowers the coefficient of friction and fracture strength of the ice. The result is a stone that doesn’t slow down as much and appears to go straighter. Good sweepers can drag a stone 10 feet farther down the ice. 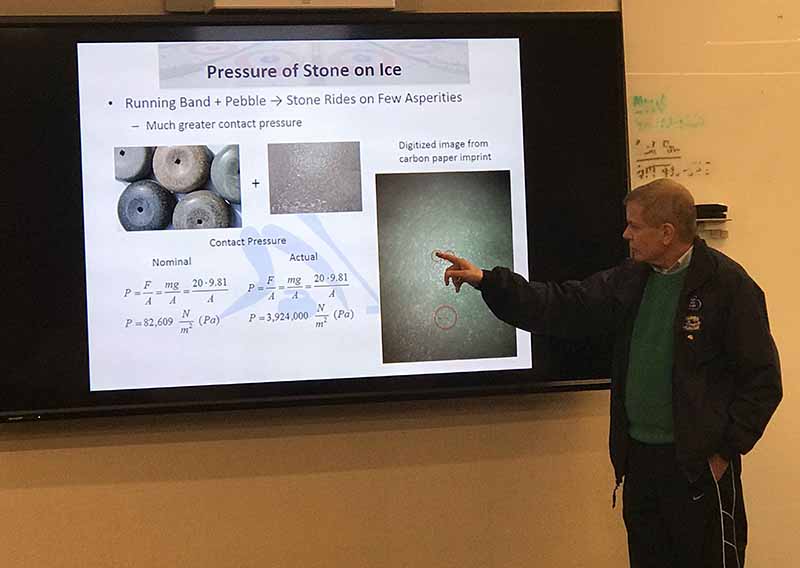 Rick explaining the science behind curling during a “lunch and learn” session at Battelle’s Columbus headquarters.

3 thoughts on “The Science of Curling”